After I came home from When Words Collide, I had the remainder of the week off to unpack, do laundry, restock the fridge, and all that stuff that’s a giant hassle if you have to fit it in around a full schedule of work.

I also had a carpentry project in mind. My main bookshelf is an odd thing. It was built out of 2×8 planks, and it was originally a sort of room divider in the kitchen. Just over three feet wide, it reached from floor to ceiling, with a mixed layout of shelves. When we remodeled the kitchen, I moved it to the study and used it for books and stuff. As you can see, stuff fit better than books. Although it had a few spaces tall enough for an atlas, as a bookshelf, it wasn’t very deep. 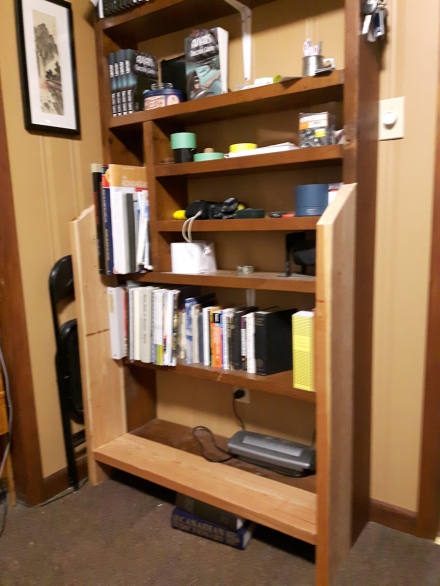 I didn’t take a proper before picture. This was snapped after I began. The part that is stained is the original unit. Note the brackets fastening it to the wall.

The new part is framed in pale wood, fresh from the lumberyard. The second lumberyard. The first one didn’t have three ten-foot 2×8 planks that were straight with smooth edges. So that took all day. On the bright side, I paid less than $50 for the lumber, and about $20 for a pack of deck screws. Any other materials I used were leftovers from previous projects.

Large books hang over the edge of the original design, and many of the shelves are too low to hold books standing upright. So the next step was to take out all the small shelves. These were robustly attached with 4″ twist nails. A claw hammer wouldn’t do it. I had to loosen the nails by pounding with a massive steel mallet (and a scrap board), then lever them out with a pry bar.

So here’s the empty frame. You can see the row of holes in the bottom shelf for the dowels that will connect the new part to the old.

…and here it is with the new section stained and fastened on. I used a gel stain because I am bad with drips if I use a liquid. I do not own a table saw, so cutting the shelves to a consistent length took much measuring and clamping down of guides for the skill saw.

I do, however, own a dowel jig, a legacy from my father. The double-depth shelves are doweled together, including the bottom shelf, where the new wood meets the old. This helped with alignment. None of the planks are perfectly straight, but you can’t tell by eye.

Here it is with the four original full-width shelves reinstalled in the upper portion. Those are spaced at 10″ to hold hardcovers and trade paperbacks. On the new part, the bottom shelf is 16″ high for oversize books, then the next two up are 12″ for reference books and one of my surround-sound speakers. The shelves are now secured with 4″ deck screws, on account of I suck at driving nails.

This is the completed project, with books installed, plus a carbon monoxide detector. The revised layout gobbled up all the books from the old version, plus every book from a second bookshelf, and still has space for more.

It’s shimmed in one corner because the floor is not level. The whole thing is also secured to a wall stud with a sturdy bracket.

This bookshelf is much more rigid than any particle-board shelving unit. Those planks are strong enough for me to stand on; they will never sag. If you have a ton of books, shelves made from cheap but sturdy lumber might be the way to go.